Proteins are the internet of the human body. Now we have a search engine.

When I give presentations at scientific conferences, I like to start by asking the audience “What will be the single most dominant source of information for disease prevention and patient care in 5-10 years?”

Given a choice between wearables, health records and AI, imaging, genetics, and proteins, very few people ever vote for proteins. If you turn that question on its head and ask how we go about treating disease, the answer is universally proteins. Every drug ever discovered and the entire portfolio of new drugs in development depends on impacting or targeting proteins. So, if proteins mediate the impact of every drug ever discovered, and we trust them as the sole source of therapeutic impact, why don’t we also think of them as the most important source of information for patient care?

Proteins are the internet of the human body

I like to think of proteins as the internet of the human body. A network of about 30,000 highly interconnected proteins controls human health. Like social media influencers, some single proteins are so incredibly important that manipulating them can transform the entire network. The most influential proteins are obvious drug targets. However, by focusing therapies only on network hubs, we are merely scratching the surface of the human proteome. There is a wealth of information that we’re missing.

To return to the analogy of the internet, successful marketers don’t only target social media influencers. They gather data from search engines and social media platforms about the thousands of other users. Seeing past the influencers requires sophisticated data capturing tools. Likewise, probing the internet of the human body will require a proteomics platform that can detect thousands of proteins simultaneously.

Proteins have historically been measured one at a time via ELISA assays. ELISAs are considered the gold standard for protein detection, but they are low-throughput and not conducive to multiplexing. If the proteome is the internet, ELISAs are telegraphs. They work well for measuring proteins one at a time, but they cannot capture the wealth of information encoded by the proteome. What’s more, proteins are neither linear, nor binary. They operate in networks. To truly understand the proteome, we need to capture many proteins at a range of concentrations simultaneously.

The SomaScan® Assay is a search engine

With the SomaScan platform, we can interrogate 7000 proteins over an 10-log dynamic range from a single 55µl blood sample at a rate of 680 samples a day (with the potential to scale). If the proteome is like the internet, then we need a lot of bandwidth – data and speed –to process it quickly. The SomaScan platform is the only technology with enough bandwidth to analyze the proteome in a clinically meaningful way.

That is not to say that every clinical research question we want to explore requires 7,000 protein measurements. In the same way that you don’t need the entire internet to answer a question, only a subset of proteins will likely be important for a given research application. However, if the exact pathology of a disease or drug pharmacology is unknown, then it helps to start with as broad of a search as possible. 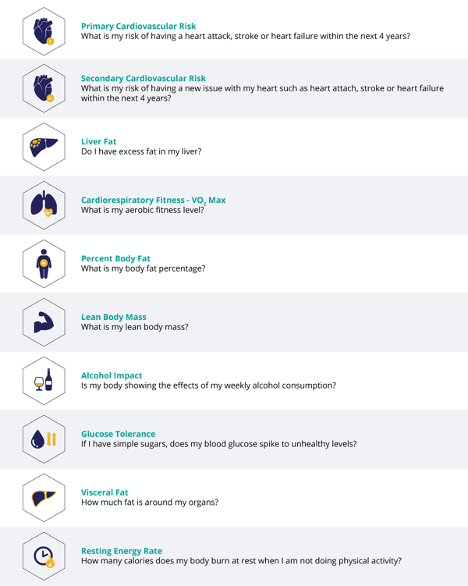 The SomaSignal Tests are like search results for a particular disease condition based on related keywords. By comparing SomaScan data with clinical data, we develop mathematical models that identify protein markers for health. In addition to identifying current health conditions and wellness habits, we’re developing SomaSignal Tests that can predict future health risks. Several SomaSignal Tests have now been approved for research use, including our most recently launched SomaSignal NASH Bundle, which detects four key NASH indicators simultaneously and non-invasively.

One of the greatest strengths of the SomaScan Platform, is the tremendous amount of information that can be derived from a single 55µl blood sample. Because every SomaSignal Test is developed using a subset of the same 7,000 proteins, multiple test results can be garnered from the same small sample.  That means that in the future, we could diagnose and monitor multiple health and wellness states simultaneously.

Thus far, we’ve focused our attention primarily on health conditions with known preventative interventions such as cardiovascular risk and glucose tolerance. In the future we hope to develop models that can help diagnose and stratify patients for conditions with more complex and varied intervention strategies such as autoimmune diseases and cancer. We have preliminary data that supports the potential use of SomaScan data and related SomaSignal Tests for predicting drug efficacy or adverse effects in the first few weeks of treatment. We are working with collaborators in Pharma and in healthcare to develop tests that match critical needs in pharmaceutical research and the healthcare system.

When I ask researchers what source of information will dominate the future of healthcare, I suspect that they don’t think about proteins, because they haven’t yet been introduced to a technology capable of capturing proteomic data in a biologically relevant way. With the SomaScan Assay, we can measure 7,000 proteins in a single assay, and 7,000 is just the beginning. Proteins are the internet of the human body, and we now have a search engine.

The SomaSignal tests are developed and their performance characteristics determined by SomaLogic, Inc. They have not been cleared or approved by the US Food and Drug Administration

PrevPreviousWhat Can Our Bodies Tell Us that Can Aid in Fighting COVID-19?
NextWill I be Mobile When I am Older?: Proteomics May Have the AnswerNext
We use cookies on our website to give you the most relevant experience by remembering your preferences and repeat visits. By clicking “Accept All”, you consent to the use of ALL the cookies. However, you may visit "Cookie Settings" to provide a controlled consent.
Cookie SettingsAccept All
Manage consent