BOULDER, Colo., September 22, 2020 — On December 5, 40 special mice were launched inside a Dragon capsule on a new Falcon 9 booster rocket from Cape Canaveral Air Force Station, headed toward the International Space Station for a 33-day mission. 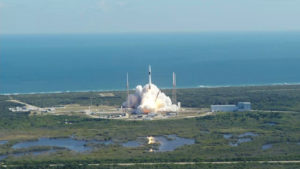 The mice came from researchers at The Jackson Laboratory for Genomic Medicine, UConn Health and Connecticut Children’s Hospital who sent the genetically engineered rodents (and their unadulterated counterparts) to space to study the effects of microgravity on muscle and bone loss.

The mice were bred to lack myostatin, which limits muscle growth. Because of this, these genetically engineered mice have twice the average muscle mass of normal mice.

“This story received a lot of press because of the mice involved,” said Joe Gogain, SomaLogic Associate Director of Clinical R&D. “These myostatin knock-out mice, or “mighty mice,” have been around for many years, but the real news coming out of this project is the demonstration that certain biochemical pathways can be blocked to protect against both muscle and bone loss.”

What they found
In a recent article in the journal Proceedings of the National Academy of Sciences, the research team reported that a decoy receptor (called ACVR2B/Fc) inhibited a signaling pathway mediated by myostatin and activin A, which prevented the loss of muscle mass and bone density during the spaceflight.

A number of pharmaceutical and biotech companies have created myostatin inhibitors and tested them in human trials. None of these trials to date have led to an approval for a drug for clinical use. Researchers took a different route in this study with the addition of inhibiting activin A—a change that produced better effects in preventing both muscle and bone loss.

Predictably, the wild type mice subjected to microgravity exhibited both muscle and bone loss. However, lean body mass in treated space mice increased by 27 percent over 22 days. The decoy receptor also increased lean body mass in mice still on Earth by 18 percent over the same time period. The space mice also showed a significant decrease in body fat after their stint in microgravity, a trend that was partially protected by treatment with the decoy receptor.

“Mice are similar to astronauts in that while in space they use their forearms to move around instead of their legs…or rear legs, in the case of the mice. So, they tend to lose muscle mass in their legs very quickly,” said Gogain. “Due to these adaptations in locomotion behavior, the microgravity environment of spaceflight was a perfect place to test the idea behind inhibiting myostatin and activin A to protect muscles and bone.”

The SomaScan® Assay is the secret weapon
The secret weapon behind this rodent research isn’t just the special mice and decoy receptor, it’s the use of the SomaScan® Assay to measure proteomic changes in the mice after their spaceflight and/or treatment with the decoy receptor. Researchers on the project used the assay data from this mission to study molecular signaling pathways that influence muscle and bone degradation, and the overall biological effects of blocking those pathways.

Astronauts could certainly benefit from this research if it helps lead to a therapeutic strategy for preventing skeletal muscle and bone loss during spaceflight and speed up their recovery when they return to Earth. But this research is also expected to help people who suffer from muscle atrophy and bone degeneration conditions, from diseases like muscular dystrophy to the effects of being bedridden from an illness.

More to come
The mission for these mice doesn’t end here. So much information came from plasma samples of the mice from this project, but researchers also collected bone and muscle tissue which has yet to be analyzed and may yield a more complete story about muscle and bone loss.